So I don’t know what to post about today, so I figure the first thing that comes to mind is a great idea. As it happens I just glanced at the kickstarter page for 404 to see how it was doing, so that’s becoming the target of this post!

Kicktraq Chart for 404: Law Not Found

As I’m posting this, the project is sitting at £7.818, a not-insignificant amount of money! That’s nearly 80% and the project was posted on Monday. After hitting £5,000 on day one, things are settling into a slow but steady rise in pledges.

I’ve gotten remarkably far without staying anything about the game, so lets get that sorted. In 404, players are controlling robots on a spaceship who have been fitted with some shiny new chips to upgrade them to be better at their jobs. Unexpectedly, after receiving these new chips the robots have found their 3 laws missing, with 3 scrambled directives in their place, robots like to obey their directives and will try their best to made do!

The objective in the game is to fulfill your 3 directives before the other robots, before the ship completes its mission. These can be a wide variety of things, from ‘Explore Breathing’ to ‘Improvise Science’. These are achieved in amusing ways, for example to explore breathing, you need a human to finish it’s turn in space alive, which will require a spacesuit, things may not go your way though, so you may end up killing the human and needing to explore further!

As I touched on earlier, the game takes place in a spaceship. On a turn, players receive a hand of cards, which are essentially programs they can run to perform tasks, such as move, activate item, pick something up, etc. You choose 3 of these and then everyone carries them out simultaneously, taking everyone closer to their objectives, or haphazardly wrecking everyone’s plans with your attempts. 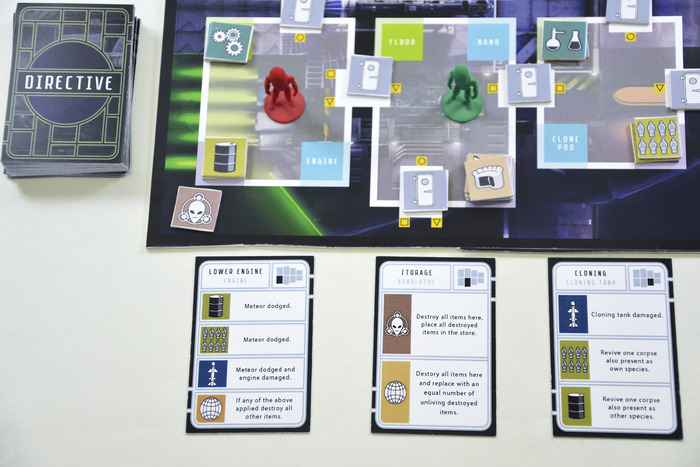 A part of the spaceship and cards for the rooms.

There are also some autonomous agents on the ship – Humans, and a monkey – who follow a simple flow chart to perform actions, such as loading missiles…or fellow humans, to fire at enemy ships which might attack during the game. The monkey of course won’t do anything so potentially useful, and will run around the ship in search of banana’s instead!

Lastly of importance, are items, which are in the form of tokens in stacks around the ship. These can be things like spacesuits, tools or an ever important banana, and include humans (dead or alive!) as far as carrying them around is concerned, although pesky living ones will try to escape, so you might want to fix that.

All in all, I think it sounds like a hilarious game and I can’t wait to get my hands on it. I did get the opportunity to play-test it a while ago, but having missed a lot of the rules and it being an early version, I didn’t really get much from the experience, other than to see how much potential it has.

On top of all of that awesomeness, is the extremely attractive pledge levels. It only costs £28 to pick up a copy of 404, with free shipping to the US and EU, and a within reason £15 ask for elsewhere. Not something I find it easy to say no to!